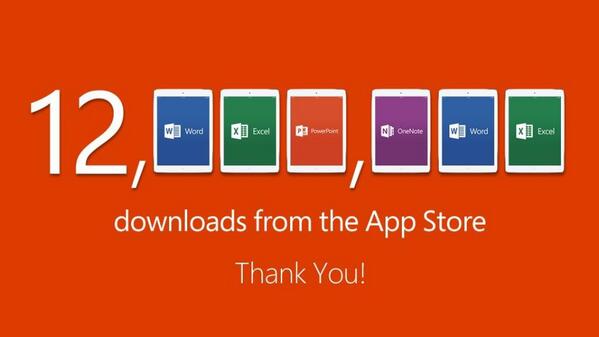 One week ago Microsoft launched Office for iPad apps in the App Store, finally allowing users to access iPad versions of Word, Excel, PowerPoint and OneNote.

In 24 hours, these Office iPad apps ended up taking up the Top Free iPad Apps spots in the App Store, a sign the apps were in heavy demand despite the requirement of a $99/year Office 365 subscription (Amazon has them for $67) for editing documents.

Today, Microsoft tweeted out from their @Office account in one week, these Office for iPad apps had surpassed 12 million downloads, an impressive feat:

More than 12 million downloads of Word, Excel, PPT & OneNote for #iPad from the @AppStore <3 #OfficeforiPad pic.twitter.com/iT2egNPDkj

While Apple has supported the launch of Office for iPad (they get their usual 30% cut of in-app subscriptions), they were quick to release updates for its own iWork suite of apps, even creating a webpage on its website to highlight new changes.

Clearly, the threat of Office stealing thunder from Pages, Keynote and Numbers is a there. Microsoft deserves some credit for these Office apps and to Apple for allowing them into the App Store. Everybody wins.