Yesterday Apple updated its iWork suite of apps for iOS, Mac and iCloud. Today, the company created a page on their website to highlight these new changes in Pages, Numbers and Keynote.

We’re constantly updating Pages, Numbers, and Keynote. So your favorite productivity apps keep getting more productive — whether you’re working on an iOS device, on a Mac, or in iCloud.  To help you keep up with the latest improvements, we’ve listed them all right here.

The site has tabs for each application which highlights the recent changes for iOS, Mac and iCloud: 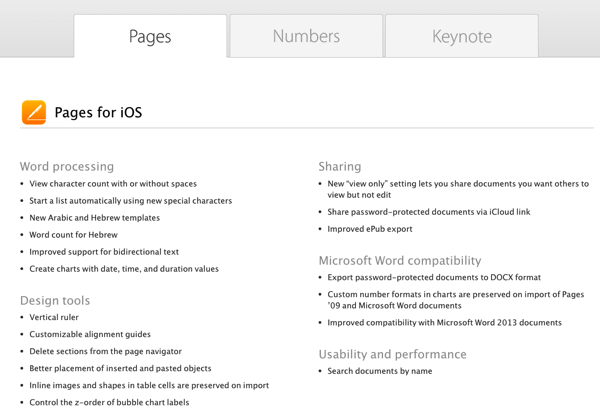 Why would Apple create this page? Well, for starters Microsoft Office for iPad launched last Thursday and made big waves (a subscription is required but the apps allow free read-only views). Currently the Top Free Apps list in the App Store is dominated by Word, Excel and PowerPoint in the top three spots, with OneNote in the seventh spot. Apple’s iWork apps aren’t even part of the top ten.

The move to create this page makes it seem Apple wants everyone to know iWork exists and is free. Jonny Evans from ComputerWorld today reviewed the latest iWork updates and concluded:

For many, iWork is the only productivity solution you’ll ever need, while for more serious users, iWork is becoming the perfect Office companion for productivity in a multi-platform, multi-device world.

Apple also recently created a page to highlight changes in iOS 7.1, the highly anticipated update for many users since iOS 7.0 was plagued with bugs and other issues.

Are you using iWork or Office on your iPad for your productivity needs?