Microsoft continues to launch some amazing iOS apps, and its latest is called Pix. This free app is what the company calls a smart camera app, as it utilizes artificial intelligence to take better images.

Pix takes a burst of 10 frames with each shutter press, some even before the tap, and then picks from the three best shots, using data from all other shots to remove noise and automatically post-process right away, by brightening faces, and adjusting colour, tone and skin, all in a second.

At the same time, if movement is detected in your images, algorithms detect it and automatically create a looping GIF, what Microsoft calls their Live Image, similar to Apple’s Live Photos on iPhone 6s, but enhanced, since backgrounds move and subjects do not. Not only that, the app only takes a Live Photo if movement is detected, saving you space on your phone.

“If you see it happen and you aren’t already taking pictures, it’s too late, you missed the shot,” said Josh Weisberg, a Microsoft researcher, who explained the motivation for creating the app was from his wife’s frustration in trying to take better iPhone photos of their kids. 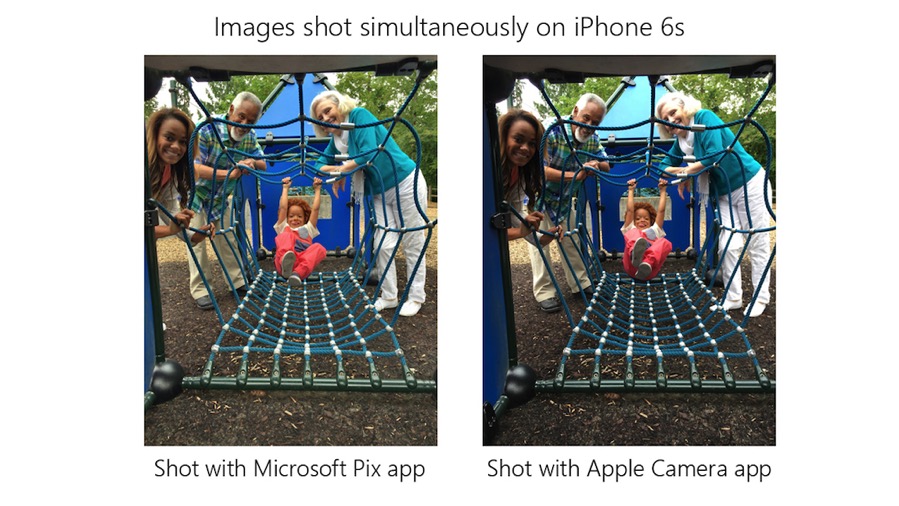 Pix starts capturing frames the moment it’s launched and the viewfinder is live, adjusting exposure and focus, plus if faces are detected, it’ll optimize the process further.

Weisberg says “Having those 10 frames – some before I even tap the shutter – and having the best one picked out for me automatically just increases the probability that I’m going to get a better photo.”

What makes Pix also great is its integration with your Camera Roll, as you can delete and see all your images within the app, as there’s no need to save images. The app works on an iPhone 5s or newer only.

Check out the infographic below on how Pix works:

Here’s a video promo of the app:

We tested Pix ourselves and it really works as described. Snapping images in backlight situations turned out much better than the iPhone camera. To have the app post-process pretty much in real-time is a time saver. Let us know how you like it!