The Museum of Vancouver has launched a new augmented reality app called ‘The Visible City’, a new virtual exhibition for users to tour downtown Vancouver’s neon history. The app contains two 30 minute tours to digitally guide you throughout the city’s colourful neighbourhoods from the past, Granville Street and Chinatown/Hastings Street.

“At the MOV, we consider the entire city our artifact, and the Visible City is one of those ways we can take history beyond the walls of the Museum,” explains Hanna Cho, MOV Curator of Engagement& Dialogue. “The app is like taking a piece of Vancouver’s history around with you in your pocket – but it’s a piece of history that you can actively contribute to.” 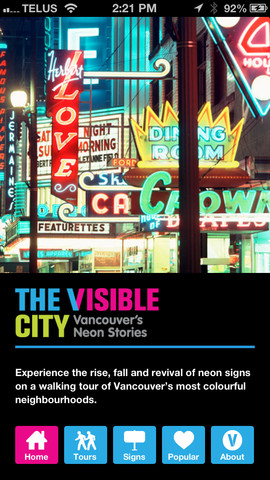 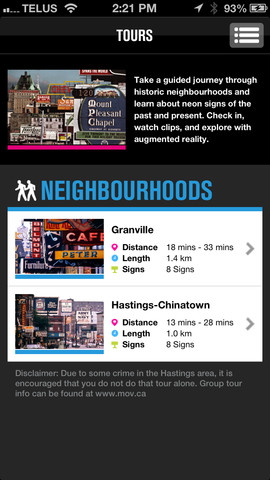 The augmented reality feature allows you to hold your camera up to a present day scene, which will suddenly show you what that same area looked like in the 1950s, 60s or 70s. There are also 40 interviews available within the app from notable Vancouverites. If users check into five places they will receive 2 for 1 admission into the Museum of Vancouver.