Today, Dell Canada and Fongo have launched a new iOS app called Dell Voice, a free to download full feature VoIP phone alternative that may help Canadians save money on their mobile phone bills. The app is compatible with iPhones, iPod touches and iPads and can be used to receive and place calls to landline and mobile phones using Dell Voice service which offers free local and long-distance calls to most of Canada, free unlimited incoming calls, free Voicemail, free Caller ID and free Call Waiting. Canadian cities that Dell Voice users can call for free are listed here. 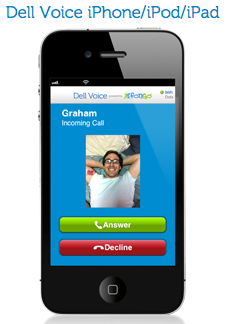 “Dell Voice aims to help Canadians reduce the cost or even eliminate the need for a voice plan. I believe Dell Voice is a game changer that has the potential to transform the telecommunications industry, while helping to put money back into the pockets of Canadian consumers and business owners.”

Below is the direct download link to Dell Voice iOS app: