• Complete list of films with screening times and locations, searchable and sortable by name, date or programme—and updated in real time;
• Read film descriptions and watch trailers;
• Build your personal list of must-see favourites;
• Capacity to save screening times in your calendar to help build your own schedule;
• Choose to get automated, daily recommendations for films that match your interests;
• Share film information with friends over Twitter, Facebook, email and SMS;
• Get addresses, maps and directions for all venues;
• See year-round and daily Festival highlight photos;
• Join the conversation and follow the buzz of what’s happening and where with Twitter integration;
• Stay up-to-date with films, exhibitions and events year-round at TIFF Bell Lightbox; 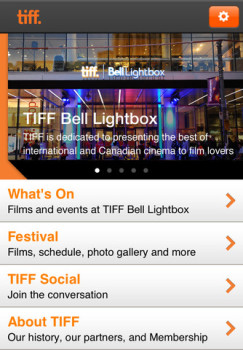 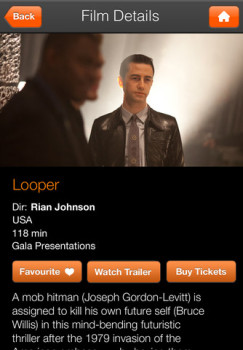 Click here to download the TIFF 2012 iPhone app–it’s free. Are you going to hit up the TIFF this year?