Looks like French reading Canadians now have a dedicated daily newspaper app, as La Presse has launched a new iPad app, the results of over two and half years of work and a $40 million investment to test and build. The app is free and aims to provide breaking news, interactive stories, along side multimedia which will be supported with AirPlay, all provided by the company’s 300 staff. Newsstand will push out new editions every morning to bring the latest headlines to its readership. 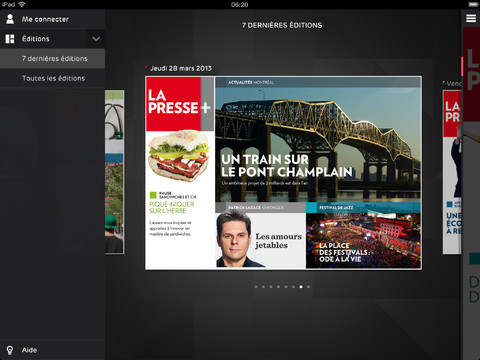 The ad model is an interactive one, to allow companies various opportunities to target their digital audience. Speaking with The Globe and Mail, president of La Presse Guy Crevier believes pay walls work for some publications, but they are barriers to attract a younger audience which knows how to get headlines elsewhere:

“We have 1.7 million readers every week and 900,000 of them never touch a newspaper,” says Mr. Crevier, who is also president of the Power Corp.-owned newspaper group Gesca Ltd. “When we speak to them, we learn they want to read news but they don’t want a paper. They don’t know why they should pay for something that is free everywhere. That is irreversible.”

Critics such as the CEO of the Postmedia Network (which favours pay walls) say La Presse is going to be fighting an uphill battle in terms of generating revenue:

“I guess they want to be different,” said Paul Godfrey, chief executive officer of Postmedia Network Inc., who has been an outspoken advocate of paywalls for the company’s 10 daily newspapers. “I don’t see how they are going to get very much money out of it – they’re swimming against the tide.”

News Corp. launched their own iPad newspaper experiment, The Daily back in February of 2011. It was short-lived and was axed a year and half later. Crevier says La Presse is different from The Daily because it will provide better breaking news:

“The Daily didn’t work,” he says. “But nobody liked it. What story did it ever break? Did you ever hear about it having a scoop? On the day they shut down, they did a front-page story about the richest dog in the United States.”

Spending $40 million to launch an iPad newspaper is an ambitious (and almost insane) experiment. Early reviews in iTunes of their new app has been quite positive though. Best of luck to La Presse.

Click here to download La Presse from the App Store–it’s free. Let us know if you think La Presse is going to ‘make it’ in the long run.