We’ve talked about RBC’s iOS app that pioneered Interac e-Transfers to Facebook Messenger contacts for the first time in North America. Now, if you haven’t downloaded it yet (it was designed for the iPad) because using the iPhone is more convenient, here is a reason to download the iPhone app now: An update pushed out recently allows users to find RBC branches and ATMs using augmented reality (via ITWorld Canada). 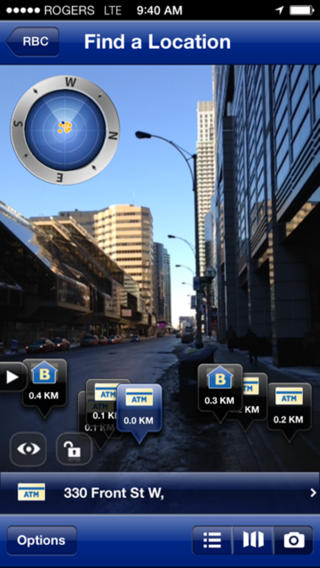 As you can see from the above image, RBC users can simply point their iPhone down a street, and the app will indicate the nearest ATM or branch. And, in case it isn’t close enough, users can point their device to another street and get new information.

“Making continuous improvements to our mobile app to allow our customers a smooth user experience is a priority for us,” Jeremy Bornstein, head of RBC’s emerging payments division, said in a statement.

To make use of this neat update, users will need to have the most recent version of the app (3.2) and Location Services on. In the app, just tap the Find a Location function and then tap the icon that turns on the device’s camera. The result will be visible immediately: The app will indicate the nearest ATM or branch onscreen based on the direction the iPhone is pointed.