Real Racing 3 has released their 1.1 update (which they previously teased) to introduce a couple Chevrolet purchase options in the Cobalt SS and Camaro ZL1. There’s also a new Hunter mode, Cloud Save functionality and over 100 new events, which now brings total events to over 1000. Full change log below:

What’s New in Version 1.1.0
Ladies and gentlemen, start your engines. American fan favorite Chevrolet makes its return to Real Racing! This update features the Chevrolet Cobalt SS and the Camaro ZL1, an all-new Hunter mode, Cloud Save functionality, and 100+ new events! Plus, compare and compete using the new friends leaderboard.

• New manufacturer – Chevrolet! The Cobalt SS and the Camaro ZL1 join the lineup
• New event type – Hunter! Chase down the hunted car and overtake within one lap
• 100+ new events! Total number of events now exceeds 1,000!
• Cloud Save functionality! Transfer your save data between devices
• New social features! See who is online and compare how your friends are doing with the statistics leaderboard
• Check your TSM mailbox for the latest friend notifications
• Improved tutorial and main menu
• Numerous additional improvements, fixes, and performance optimizations 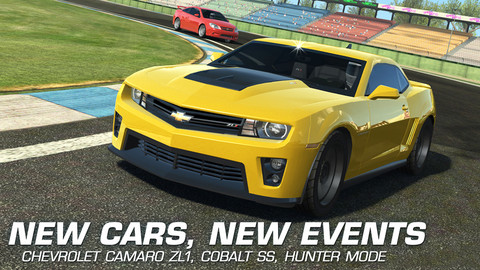 How far are you into Real Racing 3? As much as some people oppose the freemium model, it doesn’t seem to matter once you start accumulating numerous cars.