Do you always have the ‘need to go’ at the movie theatre? Then RunPee looks to be a clever app to solve your dilemma on when to make a run for the washroom, as it details specific moments within flics that are more opportune than others.

How it works is you start the timer within the app when the movie starts. If you really need to go, check the app for the upcoming intervals on when you can dash out (it’ll also vibrate to inform you of an upcoming break possibility). It also provides a quick synopsis of the few minutes you missed while you were gone. There’s also a built in flashlight so you can find your way out of the theatre.

The RunPee.com app is constantly updated, the day movies are released, with the latest releases to tell you the best time to run and pee during your favorite movies without missing anything important.

Besides that it lets you know if there is anything extra after the end credits and even gives you a synopsis of the first 3 minutes of a movie in case you’re running late.

The built in timer helps you see how the peetimes are spaced in the movie and quickly get a reading on how long you have to wait until the next peetime. The best part is that the Timer will vibrate your phone before each peetime. Now you can sit back, relax, and enjoy the movie.

Most importantly the app was designed so that you can use it discreetly during a movie without bothering those around you.

And so much more. 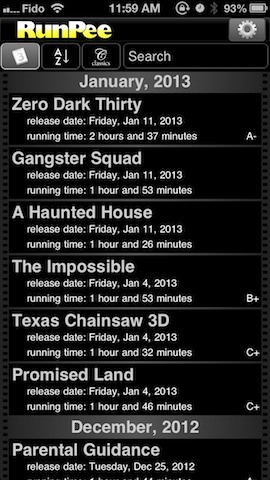 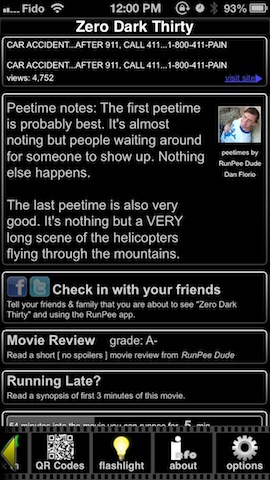 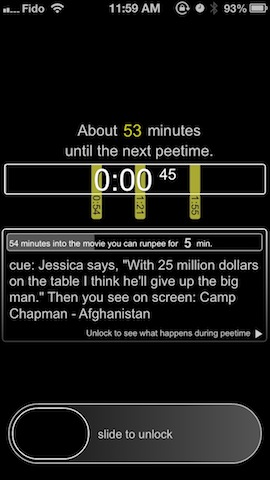 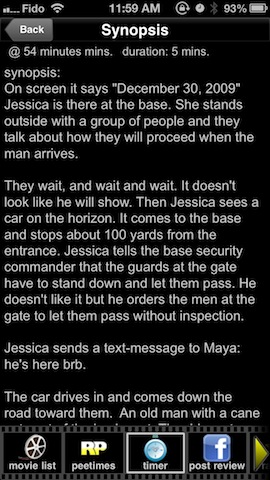 The app is the brain child of a small independent developer and appears to be an ingenious idea. RunPee is $0.99 in the App Store and from our tests of the app, it worked exactly as described.

Bonus: Leave a comment below naming the last movie you watched and one lucky winner (and possibly more) will receive a RunPee promo code.

Update: The winner of the promo code is Gregoire Cotte. Please contact us via email to get your code.