Scotiabank iPad App Launched, Along with iTRADE for iPad

Scotiabank’s iPad app is designed to make banking on your tablet as pleasurable as it is convenient. Plan for the month with the calendar view. Graphics show the status of your credit card accounts at a glance. Personalize each family member’s profile with a photo and a nickname. Every banking feature offered by Scotiabank’s iPhone app is also offered in this app. 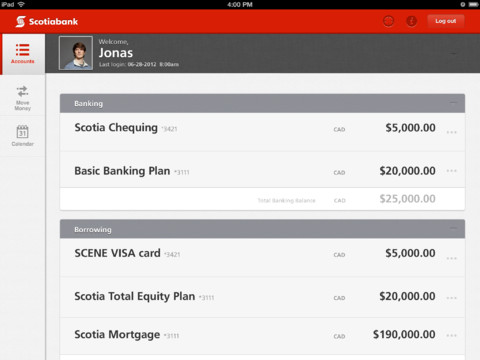 For the traders out there, the iTRADE iPad version offers the following features:

-Real time quotes without signing on
-Account balances and positions
-Equity, ETF and option trading
-Interactive charting, including the ability to draw your own trend lines, multiple technical indicators including Bollinger Bands, Moving Averages, MACD, Stochastics and more
-Market summaries, news and market movers for all major North American exchanges
-In-depth investment research, analyst ratings and research reports from Scotiabank and third party analysts
-Custom and predefined equity and ETF screeners
-Funds transfer between your Scotia iTRADE accounts, to and from your Scotiabank accounts or your accounts at other Chartered Banks
-Ability to view, modify and cancel your orders

Both apps so far have received positive reviews in iTunes, so something was done right. Let us know how you like both of these apps.