How to Use Siri to Read and Send WhatsApp Messages

Facebook-owned WhatsApp Messenger has been updated to include support for Siri to read and send messages for users in iOS 10.3 or newer.

After updating the app, you can get Siri to read your WhatsApp messages by saying “read WhatsApp messages” and they’ll be read out for you. You can also send messages with Siri by saying something like “Send a message to ____ with WhatsApp”, as shown in our screenshot below: 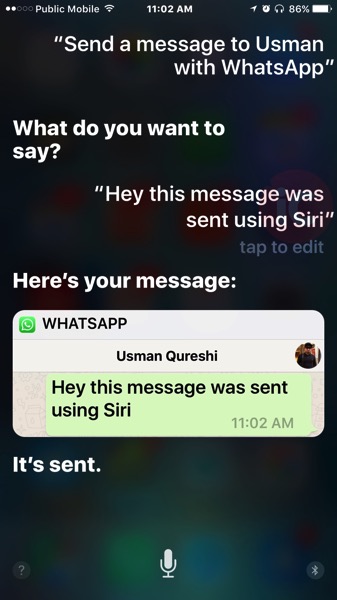 WhatsApp was also updated with “visual improvements” to various screens, such as the Calls tab, Contact Info and Group Info screens. In your My Updates screen, WhatsApp says you can now “select multiple statuses at once and forward or delete them”. This update also now supports Persian.

Click here to download WhatsApp for iOS in the App Store. Let us know if you’re going to try this.