Just a little while ago, Skype updated its app to allow video calling. Â The app allows you to call other iOS users (4.0 and over) as well as users of the desktop clients as well. Â This comes just a few days after Skype suffered from a major outage of service and will hopefully help to build back some brand trust for the company. I’ve taken a quick look at the new Skype for iPhone. 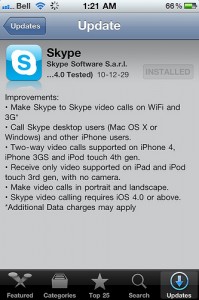 The service works very well and is of a similar quality to Apple’s own FaceTime service, but it is a bit more exciting since there are many more people using Skype already. Â The major benefit it will have compared to FaceTime is that it works over 3G as well as WiFi.

I did a quick test with my brother to try out the service and it performed quite well and up to the standards FaceTime has set. Â Although the picture is not as clear as it is with FaceTime, neither of us noticed any problems with the call quality while I was on WiFi and he was on 3G.

Setting up the call was a little confusing at first as if you simply click “call” then go to add video, the person on the other end doesn’t see your video. Â In order to use the video call feature, you need to start by toughing the “video call” button. Â This seems to be a bug though and I imagine that it will fixed in the next update. I haven’t had time to check it out, but maybe Skype got around to fixing the battery drain issues in this update (though I’m not too hopeful). 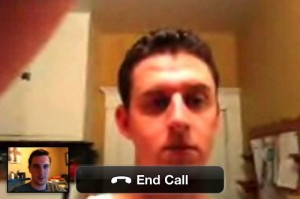 Go ahead and grab this from the App Store and test it out, I have a feeling this is going to make video calls on the iPhone a lot more common than they are already.