The free music streaming service Songza, has received an update to its iOS app which should please listeners that have wanted higher quality audio. The 2.8 update brings new high quality audio powered by Audyssey Laboratories, which improves headphone sound without using more data.

According to Songza, here’s the back story behind their HQ Audio feature:

Music is mixed in acoustically calibrated studios by professionals listening at very high volumes. When you listen over headphones two things change: (1) every headphone has its own acoustical characteristics that are different from the studio and (2) most people listen to music at volumes well below studio levels, so their perception of high and low frequency balance is completely different from the original recording.

Audyssey’s audio engineers developed new technology to measure headphone characteristics and bring them closer to studio sound while adjusting the music balance so that it preserves the original content even when listening at lower volumes.

The HQ Audio feature on Songza works by applying a headphone-specific filter to the song file in real-time that makes adjustments to the music at each frequency so that the signal that the media player sends to the headphone has taken into account its particular fit and specs. The result is sound that has the quality of a much bigger music file and can be heard the way the artist intended it to be heard.

How to toggle HQ Audio? Easy. There’s a toggle on the “Now Playing” screen that will pop up when you have headphones plugged into your iPhone or iPad. Just tap the switch which will turn blue to indicate it’s active. 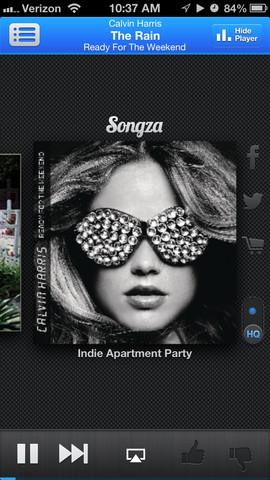 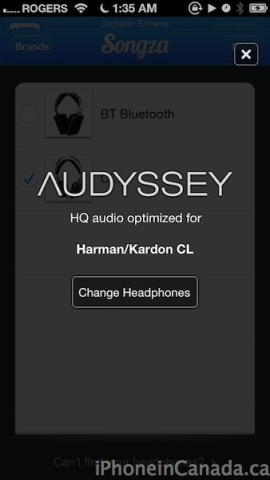 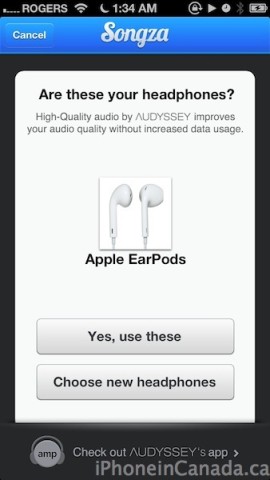 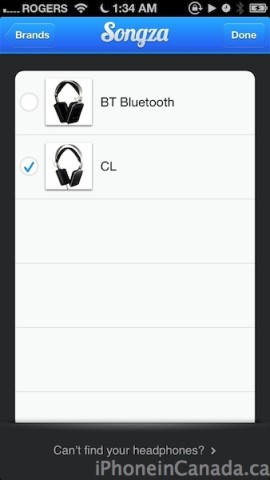 Once you plug in your headphones, Songza will prompt you to select which headphones you’re using. It defaults with Apple’s latest EarPods. HQ Audio tailors itself to specific headphone brands. Below you can see I selected the Harman/Kardon CL headphones.

With HQ audio on, music sounded like an EQ was suddenly turned on, with crisper highs and some more bass, according to the headphones I was testing. Without HQ on, music sounded muffled and the ‘lower quality’ was definitely noticeable.

At the end of October, Songza was updated with an alarm clock feature and support for the iPhone 5. The free music service has exploded in popularity as it gained 1 million Canadian users in only 70 days.

Click here to download Songza for iOS–it’s free. Let us know if you notice a difference with this new HQ audio feature for headphones!