The Starbucks App Pick of the Week is A Charlie Brown Christmas (a fine holiday pick by the way), which currently retails for $3.99 in the App Store.

“Isn’t there anyone who knows what Christmas is all about?!” Help Charlie Brown, Snoopy, and the entire Peanuts gang as they struggle to find the true meaning of Christmas. Peter Robbins, the original voice of Charlie Brown, narrates the rebirth of the 1965 animated classic as an interactive storybook complete with original dialogue, digitally remastered illustrations, animation, and music optimized for your Apple device. 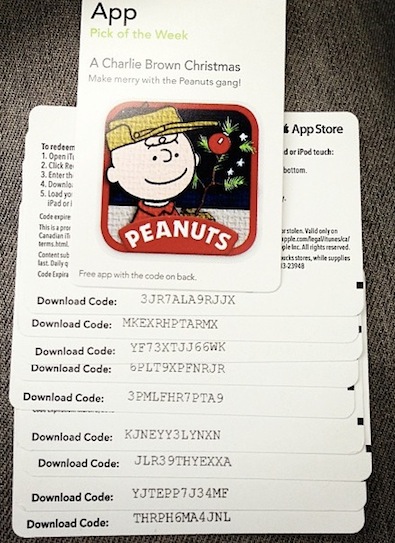 The codes were sent in via Instagram so they were public, but some still might work. You can get the app free from your local Starbucks near the drink pick up counter.

Thanks chriswtburke for sending this in!