This week’s Starbucks App Pick of the Week is Halftone ($0.99 value), the app that enables you to create comics out of your photos. The app is universal for the iPhone and iPad and has some pretty cool features such as face detection for images and more than 25 paper styles and stamps along with customizable colours. If you want to create some pretty cool vintage comics, it looks like Halftone will make it pretty easy for you.

– Universal app that runs on iPhone, iPad, and iPod touch (with full Retina support)
– Open images directly from Facebook, Flickr, and Instagram
– Send real, physical postcards through the mail
– iOS 5 face detection for automatic balloon placement
– Tight integration with Camera+ for improved image capture
– Upload images directly to Dropbox
– Save final images to the photo album, print them, or send them to friends via Facebook, Twitter, Flickr, and e-mail
– Share images with apps like Instagram, Camera+, Color Splash, and many more
– Full size image editing, including: auto enhance, special effects, cropping, rotation, brightness, contrast, saturation, sharpness, redeye, whiten, and blemish
– More than 25 paper styles, from crisp and clean to distressed and aged
– Multiple caption styles
– Six speech and thought balloon shapes
– More than 25 stamps (BLAM!, Arrrggh!, etc.) with customizable colors
– A customizable stamp that can use images from the photo library (including transparent PNGs)
– Nine unique layouts, including layouts without any captions or borders
– The ability to use any installed font at Small, Medium, and Large sizes
– Three licensed fonts: Digital Strip, Alter Ego, and Billy the Flying Robot
– Two of the licensed fonts include international characters (Alter Ego and Billy the Flying Robot)
– Support for a front-facing camera, flash modes, zoom, and tap-to-focus
– Settings screen for lots of additional customization, including halftone dot size, strength, and gain
– Support for full size images 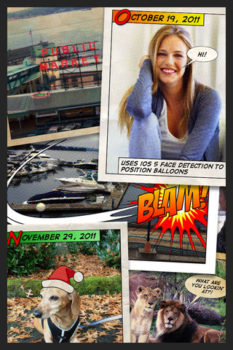 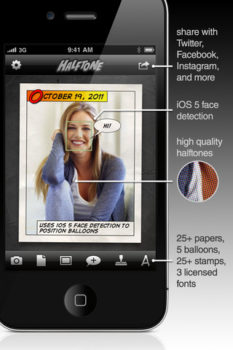 Don’t have time to make it to Starbucks to grab a free card? We have you covered. Below are FORTY-THREE promo codes for Halftone. Here’s how to redeem a promo code. Enjoy! 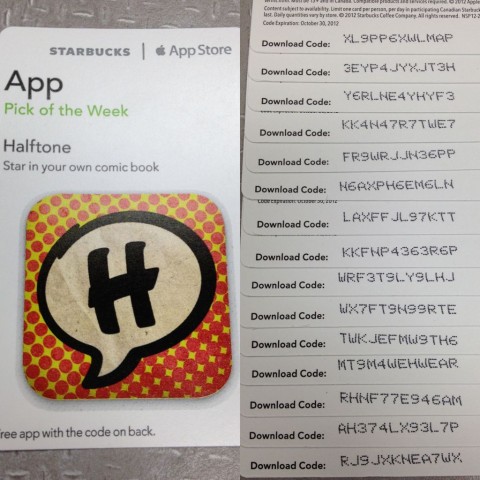 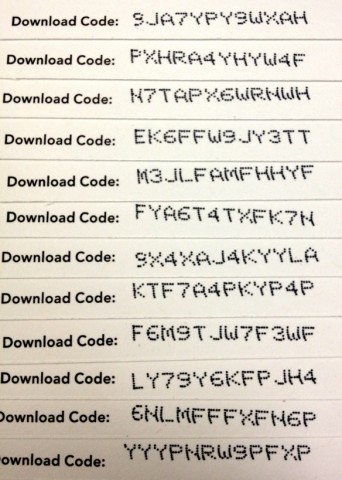