Starbucks Launches New “Pick Of The Week” For iPhone Apps

Expanding on their “Pick of the Week” program for music, which launched in 2008, Starbucks is now serving up free weekly apps.

Since 2008, Starbucks customers have been able to visit a location and pick up a small card with an iTunes code for a free song or music video. You can now do the same for apps.

The first app to debut the new Starbucks program is Shazam Encore, a music-identifying app that sells for $5.99 in the App Store.

At this time the new program seems restricted to USA-based stores but may eventually make its way to Canada, just as the Pick of the Week for music did.

However, if you happen to be at a USA Starbucks, you can still redeem an app code by first creating a free USA iTunes account. 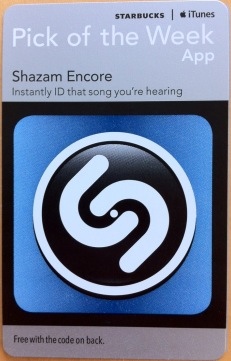