Tangerine Mobile Banking for iOS has been updated to bring Touch ID support for the Orange Snapshot feature (which shows your balances and more), along with iOS 8 compatibility.

What’s New in Version 1.7.0
Touch ID – You can enable Touch ID for use with the Orange Snapshot feature in the Tangerine Mobile Banking app.
Tangerine will then be able to use Touch ID fingerprint authentication in addition to our other Orange Snapshot security features. It’s another way we can help protect your privacy and security. 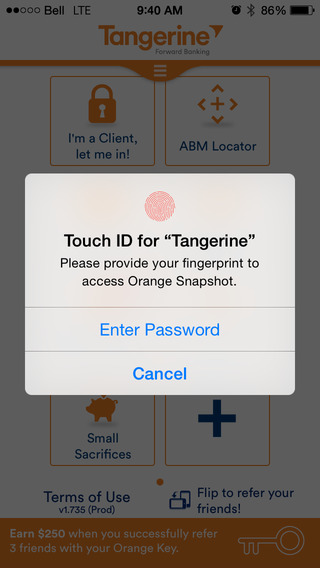 The Tangerine iOS app also supports mobile cheque deposits, a feature which launched back in 2013 when it was still ING Direct, prior to being bought out by the Bank of Nova Scotia later in the year.