After using Telegram last fall we were impressed with the app’s speed and simplicity. It gained further popularity thanks to a recent WhatsApp outage, causing 5 million people to sign up in just 24 hours. 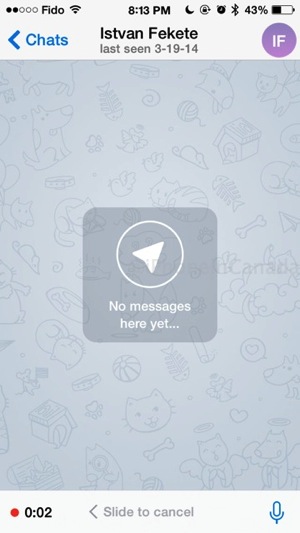 It will be interesting to see the pace of Telegram’s growth and whether it can be sustained. Right now Telegram’s pace of 5 million active users per month is slightly behind WhatsApp (5.2 million/month) when the latter first revealed its active user base at 250 million last summer, achieved in four years.

Last month when it was announced Facebook had acquired WhatsApp, the latter said they were at 450 million monthly active users, which is about 13 times the size of Telegram’s current user base.

The problem for Telegram is the cross-platform space is a crowded one, and trying to convince friends and family to download yet another messaging app is an uphill battle on its own. But for Telegram, their claim to fame as being the ‘most secure’ chatting app is growing on people especially with recent paranoia surrounding government monitoring of smartphones and more.