Yesterday evening Temple Run 2 hit the App Store and in mere hours after its launch, the game has vaulted into the top spot under free apps. The sequel to the original classic hit is the brainchild from indie developer Imangi Studios, led by a husband and wife team. For Temple Run 2, the core team consisted of five people. 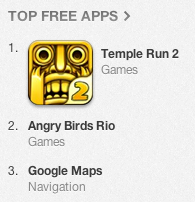 AllThingsD has posted an interview with co-creator Keith Shepherd, where he talks more about Temple Run 2 and their vision behind the game. Here’s an excerpt:

AllThingsD: What was the thinking behind a sequel? Why do one?

Keith Shepherd: We wound up with all this stuff we wanted to do in Temple Run that we couldn’t physically do as an update to the original. It was just a really small team of us that built the first one [Shepherd, Luckyanova, and artist Kiril Tchangov], and we had no idea that it was going to go on to become this worldwide phenomenon. It wasn’t designed to be ported to other platforms or to be continually added to over the next couple of years. We wanted a fresh start.

Imangi Studios rewrote Temple Run 2 from scratch and used the game engine Unity, to offer better graphics, as opposed to the original game which was built using their own in-house engine.

After playing Temple Run 2 last night on both my iPhone and iPad, the graphics are pretty amazing and the game play is really smooth. What’s your high score so far? Have you made any in-app purchases?