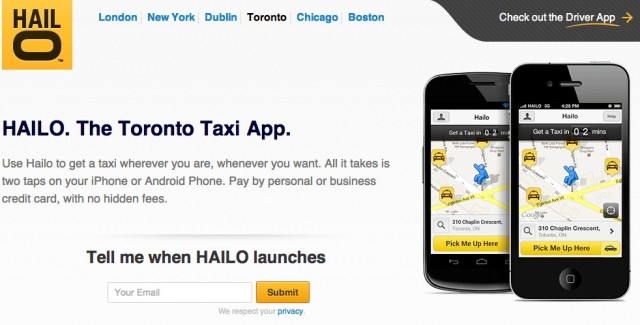 The City of Toronto has announced it has awarded Hailo Network Canada its first taxi license, a move that has granted the first app-based taxi company to get licensed in Canada.

Hailo originally debuted in London but is now making its debut in Canada via Toronto first, later this year. The app markets itself as just “two taps” on the app for iPhone or Android to arrange a taxi. A recent update now allows users to keep track of their Hailo taxi trips and also a “lost and found” feature to recover forgotten items.

“The taxi industry in Toronto is broken,” says Hailo Canada President Justin Raymond. “The system is unfair to drivers and cumbersome for passengers. But technology can drive the change the industry needs, and we’re thrilled to see the city recognize this fact with today’s announcement.”

In March, TechCrunch reported Hailo had been downloaded almost 200,000 ties in London with over 3,200 drivers using the app since the launch last November. It has since become the largest app-based booking service in the world.

For Toronto taxi drivers, the app sends real-time info on taxi stands, processes credit cards, has no monthly fee, real-time geo-based alerts, stats to replace a logbook and a chat feature to stay in touch with other drivers. Talk about taking technology to taxis, eh?

Click here to download Hailo and get a taste of what the app’s interface offers. It appears they are doing a decent job as iTunes ratings are quite positive for the app.

Other taxi apps we’ve covered before include TaxiNow and TAG Taxi. Are you excited for Hailo to launch in Toronto?