This week’s free app of the week is vjay for iPhone, by the developers algoriddim. The app essentially helps you create some cool looking videos, with the help of special effects and more, plus there is quick and easy sharing to Facebook and YouTube.

vjay transforms your iPhone or iPod touch into a cutting-edge mashup machine, directly integrated with the media libraries on your iPhone or iPod touch. Mix and scratch your favorite music videos from iTunes or combine songs from your music library with personal video footage into an interactive audio visual experience. You can even use the built-in camera on your device to add your very own clips to the mix with added special effects. The first of its kind on the iPhone or iPod touch, vjay lets you create fun video mashups, display directly to a TV, or record your performances live to share instantly on Facebook or YouTube. 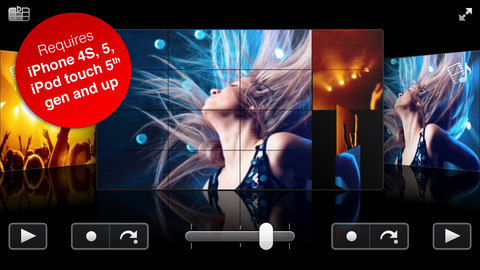 vjay requires an iPhone 4S or later or iPod touch (5th gen or higher) running iOS 5 and later. The iPad version is regularly priced at $9.99 (iPhone at $2.99); this is one heck of a free download.

Click here to download vjay for iPhone while it’s free for the week. Let us know what you think of this one!