Waze announced last night (the post has since randomly been taken down) it had hit a total user base of 34 million people using their app in 2012. Along with their announcement, the company stressed again their goal was to save every Wazer 5 minutes per day in commute times. They estimate Waze will be able to save a collective 80 million hours this year just from outsmarting traffic:

We’re just beginning to model the impact of helping one another out of traffic and real time savings but its working- we are saving people lots of time. Individually on average we are saving about a one work week vacation per year for spending time with family, pursuing our adventures and learning about the world or going on secret missions. (Its also stressful traffic “negative time” being converted into “positive time”…if we plan well.) When we look at the collective numbers, it’s even more striking. We estimate a collective surplus of over 80 million hours next year just from outsmarting traffic.

To illustrate what Waze thinks it will accomplish in 2013, they created an infographic below: 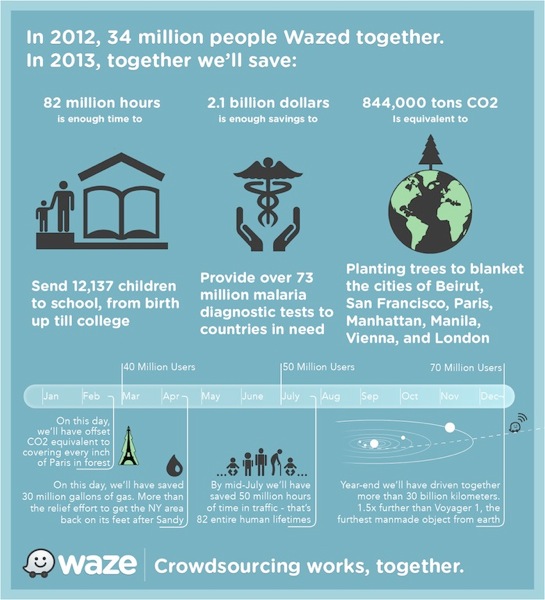 When Apple CEO Tim Cook plugged Waze as an Apple Maps alternative during his public apology over the latter’s shortcomings, the former experienced a 40% spike in downloads. Last week, rumours hit the web Apple was in talks to acquire Waze, but those turned out to be false.

Are you using Waze at the moment? What’s your estimate on the number of minutes it has saved you in commute times?