Waze, the maker of popular free social GPS and traffic apps for iPhones and Android devices, recently unveiled its plans to bring its rapidly growing social mapping software to the cars later this year. Today, the company has announced that its social navigation and traffic service has hit the 20 million users landmark (via Business Insider). The firm is funded by major Silicon Valley funds as well as from Horizons Ventures Hong Kong. In total, Waze has raised about $67 million since its launch in 2008. 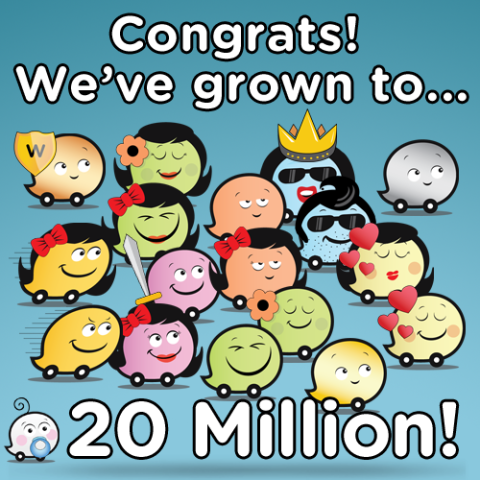 One of the best features of Waze is its ability to gather real-time traffic and accident reports from the community. For instance, if a user is on Waze while driving and hits traffic, a red line will appear behind the vehicle on Waze’s map to alert others in real time.

Hooray! We’re proud to announce that we just passed a pretty big milestone. As of today, there are over 20 Million Wazers world-wide!  Its been an impressive 2012 for us so far as we’ve doubled our Wazer population from 10 Million to 20 Million in only 6 months. This month alone, 1.8 Million Wazers have joined the community. That’s some wicked awesome growth! Equally impressive, to date, over 3.2 billion miles have been driven with Waze. Yes we’re in the billions. Wow!

Of course, we’d be remiss not to thank our wonderful community (each and every 20 million of you) and the fantastic Waze editors who work so hard on improving the Waze maps. Without a good map the numbers would have never grown as much. And just wait wonderful Wazers because we’re working on a great new version the best from us is still yet to come!

The iOS version of Waze is a universal binary available as a free download in App Store at the following link: