WhatsApp has quietly launched tonight a new feature for its app: push-to-talk messaging. The update has been made available over-the-air, not via an update via the App Store. It’s now live and it’s pretty slick after giving it a couple tests.

In an interview earlier this evening with AllThingsD, WhatsApp co-founder and CEO revealed the messaging service now has over 300 million active users, with 31 billion messages processed per day (11 billion sent, 20 billion received), up from 27 billion in June. Their users also share 325 million photos daily.

As for the new voice messaging feature, Koum says it was carefully designed over the past six months and was made to be simple and easy to use with one tap to send, versus three taps in Facebook Messenger to send a similar message in comparison:

With the updated WhatsApp, a user pushes to record a message rather than type one. When she lets go, the message sends. If she decides not to send, she swipes to the left and the recording is deleted. All that is built into a single tap.

“The number of taps matters. People want to send a message and be on their way,” Koum said.

The interesting thing about this new voice message feature is there are no limits on message lengths and volume of playback will automatically adjust based on whether your iPhone is held close to your ear or away at arm’s length. A blue microphone icon notifies users a message has been played by a recipient.

We did a quick hands on with this new feature and it does work as advertised, but we did have some moments where messages sent even though we didn’t want them to. So that might make for some interesting conversations later on.

All you have to do is tap and hold the new default mic icon, speak your message, then let go. It’ll send your message right away. If you don’t want to send it, just slide to the left to cancel. 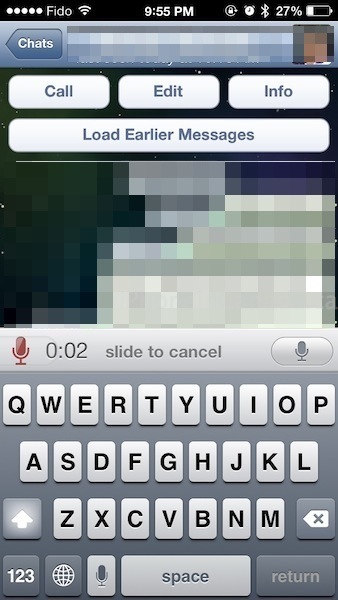 As you can see below, the default blue ‘send’ icon only appears now when you enter a character in the text field. Otherwise, it’ll default to the voice message icon: 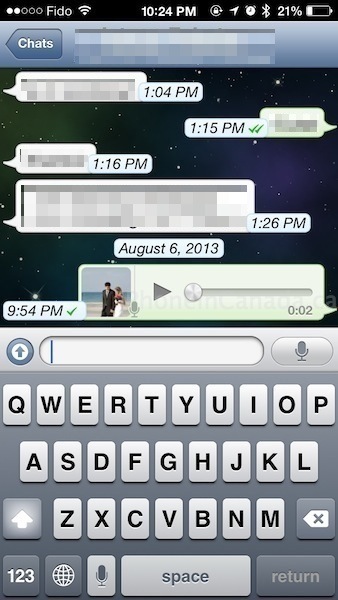 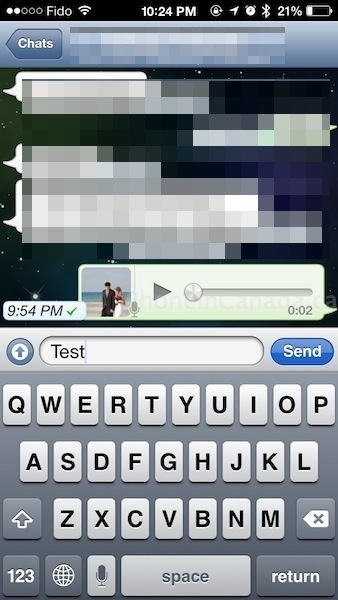 WhatsApp today for the first time rolled out this update simultaneously for all of its apps across all platforms. The update should load automatically once you launch WhatsApp.

Let us know how you like this new feature!

Update: here is a video of how this feature works: