Why No iTunes Credit Towards App Purchases in Canada?

Canada seems to be always a step behind our American counterparts when it comes to transactions related to electronics or online purchases. Take for example, how Canada was one of the last countries to get the Skype for iPhone app. Or how Canada was recently shut out from the latest Amazon Kindle launch.

Canada Seems to Always Be One Step Behind…

Either way, Canada seems to get the shaft somehow and it’s even more prevalent when it comes to iTunes gift cards. Canadians can purchase iTunes gift cards to use toward the purchase of music, TV shows, and movies–but not towards apps within the App Store. How many people out there have purchased an iTunes gift card for the purpose of buying apps, only to discover Apple won’t allow you to do so?

What gives? Well, you’re not along out there. Apple’s response to a Mr. Jim Whitelaw (and many other Canadians) is that “this is due to Canadian Commerce Laws that the iTunes Store must strictly enforce.” Huh? What does this mean? What law exactly is Apple talking about? This is when Jim decided to take this a bit further–and contact his local Member of Parliament and eventually reached up the ranks to the Canadian Minister of Industry, Hon. Tony Clement (letter below)! 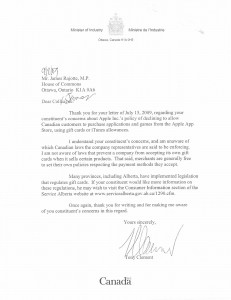 Jim Whitelaw is still playing email tag with Apple Canada, and so far he’s been offered two credits for songs (which he didn’t ask for). All he wants to do is allow his daughter to use her iTunes gift card towards app purchases for her iPod Touch! Maybe one day Apple will allow Canadians to use iTunes gift cards towards app purchases. Until then, your only choice is to link your credit card with your iTunes account in Canada.

Anyone else out there thought they could use their Canadian iTunes gift cards for app purchases, only to be disappointed? Let us know below!

Thanks to BC Brett for the heads up!