Zombieville USA was amongst the first games on App Store that became massive iOS hits. Initially available for iPhone / iPod touch only, an HD version for iPad was introduced later which brought Mika Mobile even more appreciation, and of course money. Now, their best seller has received a worthy sequel i.e Zombieville USA 2 and from the looks of it, it is every bit as exciting as the original. There is tons of unlockable stuff in the game. Game Center is fully supported with iCloud support for cross-device progress syncing. Best of all, the game adds co-op multiplayer both locally via Bluetooth as well as online over WiFi. 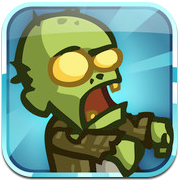 Here are the official details via iTunes:

Brought to you by the creators of Battleheart, OMG Pirates!, and the original Zombieville USA – this sequel is jam packed with content and features. Take command of your favorite character, customize them with a spectrum of weapons and skills, and do battle with the living dead – either alone, or with your friends!

• Simple, pick-up-and-play arcade action. Fight hordes of enemies, make the most of your ammo, and go for your high score!
• Tons of unlockable content, including dozens of weapons, skills, playable characters and upgrades.
• Incredibly fluid, stylish animation optimized for retina displays.
• Full Game Center integration, including achievements and leader boards.
• Wireless Co-op multiplayer via bluetooth or wifi! (requires iPhone 3GS+, iPod Touch 3rd Gen+, or any iPad)
• iCloud support, allowing your zombie slaying progress to sync automatically to all of your devices!

The game is available as a universal binary for both iPhone & iPad as a single purchase of only $0.99 in the App Store.

American Express Canada recently updated their iOS and Android apps to include built-in chat support. The new feature allows cardholders to chat with a representative for customer support. All you have to do to get started is tap the ‘chat’ icon in the upper right corner of the app to get started. Once you ask...
Gary Ng
1 day ago