Since its launch on September 19th, iOS 6 has recorded an impressive adoption rate in the US and Canada. As the Chitika Insights study points out, iOS 6 accounted for 15% of all iOS traffic within just a day of availability and now, after a month, its adoption rate has surpassed the 60% milestone. 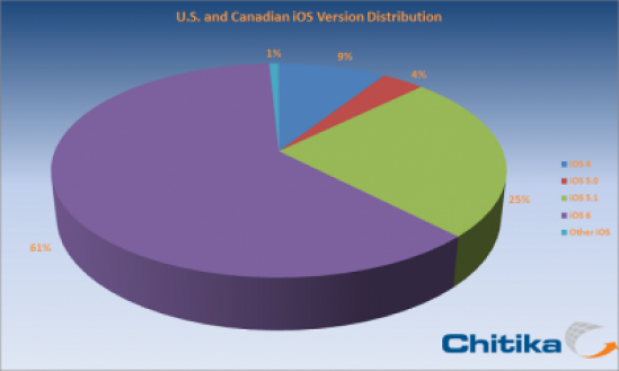 Chitika Insights took a sample of hundreds of millions of mobile ad impressions from its network between 19 September and 19 October, comparing it to the total iOS Web usage. The result can be seen below. 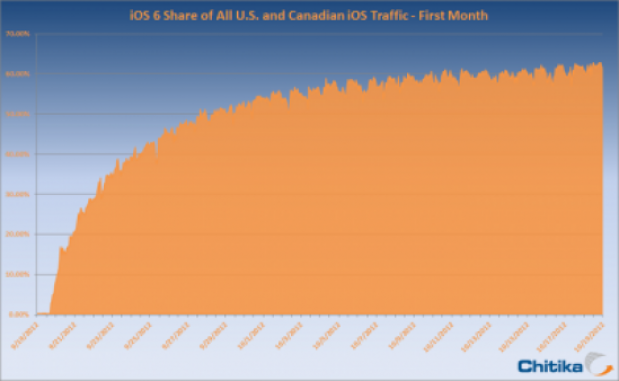 Despite the iOS 6 adoption rate slowing down during the past week, it is nevertheless poised to grow. Just to put it into perspective, looking at the 2 October usage rate and comparing it to the 19 October numbers, there is a 10% usage rate difference, with iOS 6 now accounting for 61% of all traffic.

When compared to iOS 6, iOS 5 adoption rate appears to be have been much slower. A Chitika survey conducted after almost a month of iOS 5 going public shows only 38% of iPhone users had updated their handset to iOS 5, while iPad users running iOS 5 accounted for 30% of the total. iPod Touch users ranked third, with the lowest adoption rate: 8.8%.

However, the picture looks totally different when the adoption rate of iOS 6 is compared to the world’s most popular mobile OS, Android. While iOS 6 adoption is above 61%, the last two major releases of Android, Jelly Bean (2.1%) and Ice Cream Sandwich together account for only a quarter of the devices accessing Google Play.

Citing the Chitika spokesperson: “Apple’s progress with iOS 6 is the best in the industry and sets the bar high for its competitors when it comes to minimizing fragmentation.”