With the release of OS X Mountain Lion, one of the most anticipated features was being able to use AirPlay Mirroring from your Mac to your second generation Apple TV. Many users have experienced AirPlay on their iPhone and iPads, and the ability to use the feature from your Mac seemed really appealing.

For those that didn’t thoroughly check out the pages on OS X Mountain Lion, they probably only saw AirPlay Mirroring listed as a feature from the ‘What’s New’ page: 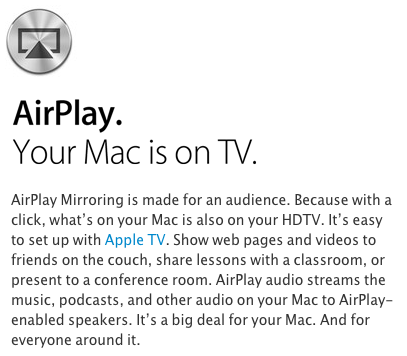 It comes down to hardware advantages of mid-2011 Macs, as they received Sandy Bridge i5/i7 chipsets that included separate dedicated hardware encoding for H.264. AppleInsider explains why older Macs can support AirPlay, but not AirPlay Mirroring:

These systems are the oldest machines capable of supporting AirPlay Mirroring because they are the first to deliver dedicated hardware encoding for H.264. Without a CPU capable of crunching this task using specialized hardware, earlier Macs simply can’t transmit video fast enough without a lot of heat and screaming fans.

Older Macs can already send video from iTunes to Apple TV via AirPlay, but they stop local playback while doing this. Mirroring requires the system to produce two video images, one driving the local display and one to be wirelessly delivered to the external screen.

AirPlay doesn’t just relay video from the computer (or iOS device) to Apple TV. It scales down the video to fit on an HDTV resolution, and has to convert the colorspace from the computer’s RGB to the native YUV that televisions use. Both tasks require a lot of processing resources, so without the extra hardware available on newer Macs, mirroring isn’t possible.

Users have noted the app AirParrot mimics AirPlay Mirroring on pre-2011 Macs with both video and audio. However, note that live video encoding is a hardware intensive task–so note your Mac will run very hot with the fans on full blast.