Smartphone manufacturers shipped a record 700 million handsets in 2012, which represents a 43% increase on a global scale according to a recent Strategy Analytics report. Yet Apple and Samsung dominated the market with a combined 348.8 million units shipped in 2012.

There is a slowdown in growth though, from 63% recorded for 2011 to 43% in 2012, as the developed markets such as North America and Western Europe have begun to mature. 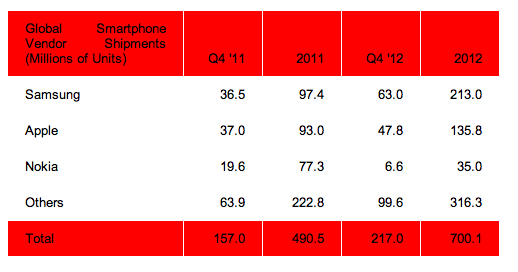 As you can see from the above image, Samsung has reported huge growth, extending the gap between itself and Apple, as the South Korean company’s handsets accounted for 30% of global shipments with 213 million units, while Apple maintained the second spot with 135.8 million units. Nokia, on the other hand, was left far behind by the two leaders, as it only shipped 35 million smartphone units.

“Despite tough competition in stores and courtrooms, Samsung continued to deliver numerous hit models, from the high-end Galaxy Note II phablet to the mass-market Galaxy Y,” Strategy Analytics said in a blog post.

Apple however, saw a 46% rise in shipments, giving the company about the same 18% of the market it had previously.