Apple Event Scheduled for April 20, According to Siri 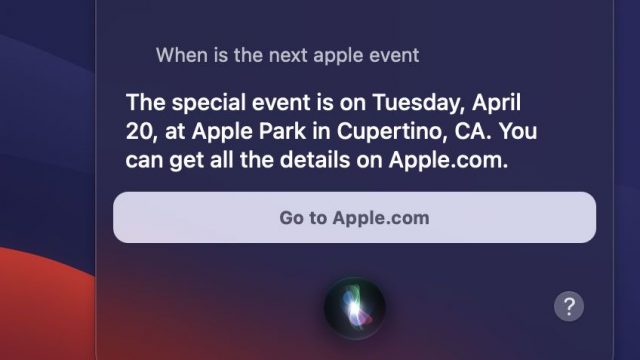 Folks have been speculating when Apple will be holding its early 2021 Apple event. Apple has kept its cards close to its vest and remained fairly silent on the matter. However, Apple’s own virtual assistant may have spilled the beans. According to Siri, the event is scheduled for April 20.

News of this potential slip-up comes by way of TechRadar who reports that at one time in certain regions, Siri would detail the upcoming event when asked “When is the next Apple Event”. According to Siri, a “special event” is scheduled for Tuesday, April 20. The event is also said to take place in Cupertino, so it’s assumed a virtual keynote will take place at Apple Park.

We attempted to have Siri detail this information ourselves. Though, whether or not Apple has since pulled the response, we were unsuccessful. Instead, we were simply redirected to Apple’s website which contained no new information. However, on top of TechRadar‘s report, many other instances of this response have been shared on social media.

So yes, I normally wake up and talk to #Siri, but asking when’s the next #AppleEvent doesn’t normally yield a response. Seems like April 20 is the date. pic.twitter.com/TrdDDA654t

It’s been suggested that Apple’s upcoming event will be hosted as a way for the company to reveal its iPad Mini, AirPods 3, and AirTags, all of which have long been rumoured to be in development. Seeing as though Apple has yet to officially announce the event, there may be room for a surprise or two.

Apple traditionally begins sending press invites out a week in advance. Additionally, a formal announcement should be made in the coming days if the April 20 date is indeed the correct date.