Users may recall the Apple Maps debate which triggered an apology letter signed by Tim Cook. Since then the app has been updated and, as reports from different sources point out, Apple is working on improving its maps. Meanwhile Google Maps arrived at the App Store and quickly grabbed its place among the top 10 apps. 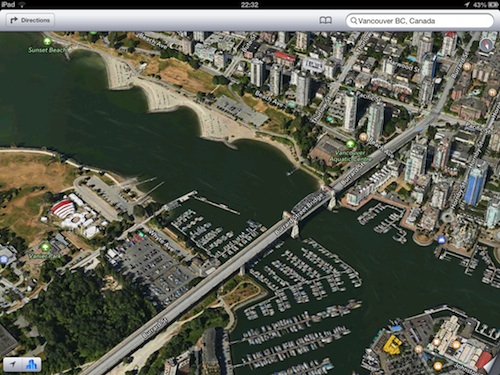 Both cases reveal that users are after quality and reliable apps that guide them through their journey. So what does this mean for developers? Apple Maps isn’t that bad after all, but users are familiar with the GMaps experience – so which one to choose?

To answer all the above questions, Fast Company’s Michaek Grothause spoke with two developers of geocentric apps: Lee Armstrong, developer of the popular Plane Finder app, and Bryce McKinlay, the coder of the London Transport app, Tube Tamer. They were quick to point out that Apple Maps has some great advantages compared to Google Maps, but they decided to go with both and let the user choose.

“From a developer’s perspective, Google Maps are superior to Apple’s in that the SDK supports 3-D buildings, and users have the ability to rotate and tilt the map view in the app–something Apple doesn’t currently support in MapKit,” said McKinlay. He also noted that Google’s SDK offers better hybrid and satellite imagery, a particular advantage for developers using a lot of map overlays.

“Apple’s satellite imagery is very variable in quality,” said McKinlay. “Some regions of the world have quite good quality images, while others are very poor. For Tube Tamer, obviously we’re concerned with London, and the quality of the images here are not great. Besides being ‘blurrier’ than the Google Maps equivalent, for some reason they are very dark and have little contrast, which makes it difficult to distinguish features clearly in shadowy areas. The other issue is the way roads are drawn in the ‘Hybrid’ view. The Google SDK and, in fact, the Apple Maps app draw semi-transparent roads so that the street layout is marked, but you can still see the images underneath. In MapKit, the roads are drawn opaque, which means it’s often pretty difficult to see much of the imagery.”

However, Google Maps iOS SDK has its own drawbacks as well: Bruce McKinlay warns that the Google Maps SDK is expensive. Also, with GMaps developers need to add third-party, non-open-source framework to their apps, which increases the app’s download size. By contrast, MapKit is shipped as part of iOS, so the size of the app is negligible.

But there are other Google Maps SDK shortcomings, including markers, gradient polylines and overlays, since the SDK offers very limited functionality and flexibility compared to MapKit’s overlays.

An immediate advantage of MapKit is that developers can deal with a mature API – it’s been around since iPhone OS 1.0 – and it’s quick and easy to get up and running. Google Maps SDK, on the other hand, is new with a small number of developers pioneering implementation.

But, in the end, which one is a winner? Unfortunately the answer isn’t that simple. Apple Maps has its own advantages, like longevity, but it has its share of drawbacks as well, just like the Google Maps SDK. So in the end, developers may end up choosing both, like Plane Finder does, leaving the choice to the user. But this also means developers need to do the same work twice.

“There were a few reasons we chose to implement a dual mapping solution. The first was where we couldn’t do everything we needed on the Google Maps so had to keep Apple Maps, otherwise we would be removing features from our app (such as advanced overlays and gradient polylines)! The features we would have to remove would take our app back a year or so in development and we would also have a backlash from our user base,” Armstrong says. “The second reason was the stability and performance. As Google’s Maps for iOS is still a new framework it had a lot of crashing. This is getting better with each release but we needed a fallback to users contacting support. Apple Maps are also much faster as there are methods that allow geospatial queries to the map to get at certain data very quickly, these are not in Google Maps yet so there is a definite lag to the Google Map for us.”