Apple is working to improve its controversial Maps application by adding useful features such as generating travel routes based on user preference and Waze-like, crowd-sourced real-time traffic data. 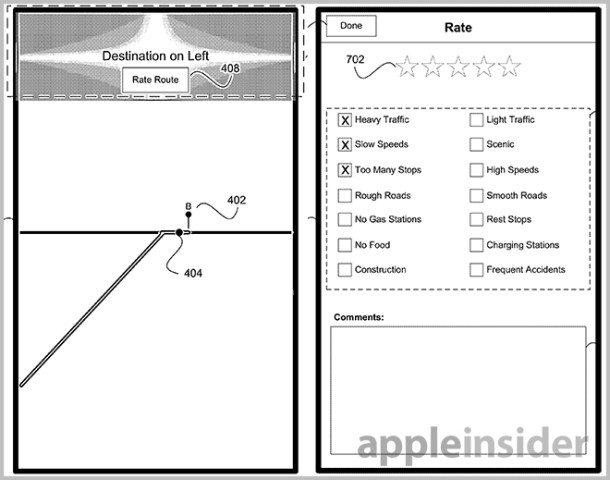 The US Patent and Trademark Office has granted Apple a patent for “User-specified route rating and alert” (via AppleInsider) that aims to generate custom routing information based on what users report, much like the now Google-owned Waze does.

However, Apple goes beyond Waze with a unique feature allowing users to assign a number rating to a route they just used. This rating is centralized and pushed out to other users. The system also generates separate routes for other users based on user input.

Like any other navigation app, Apple’s new Maps feature will allow users to select an A and B point, and the system will display an ideal route based on user preferences. The interesting part comes when the user starts driving: the patented system can initiate alerts at given points along the selected route, based on the user’s preferences. For instance, a poorly rated location or accident will be displayed only if the user is within a specified distance of the incident.

Since the system is based on user input (rating), at the end of the route it will present a rating interface, and the user will need to add a rating, helping the system generate routes or parts of routes for other Apple Maps users.

The patent application was first filed in December 2011 and names Jorge S. Fino as its inventor.