Starting today, Apple will enable “reader” apps to link out to their own websites. As a part of newly refined App Store policy changes, apps such as Netflix, Spotify, and Kindle will be able to link to their own sites for the user’s benefit.

Apple highlighted this change is going into effect via an announcement on their developer support page (spotted by The Verge.) Moving forward, users will be able to navigate from an iOS app ie: Netflix straight to the company’s website if needed.

For instance, previously, if you installed the Netflix app but didn’t have an account, you would have had to register on a browser. The app itself would not link back nor inform the user where to go to create an account. This would often lead to frustrating user experiences. The reasoning behind this ordeal was Apple’s App Store policies. This stemmed from developers not wanting to use Apple’s in-app payment system, which would in turn grant Apple 30-percent of the purchase.

Moving forward, it appears as though developers now have the option of adding links to bring users to their own websites. Developers of reader apps can now request access to Apple’s External Link Account Entitlement. Based on information found on the site, once granted the entitlement, developers may use eternal links but will have to notify the users that purchases made will not be made through Apple. There will also be a page explaining to the user that they are navigating to a third-party site. 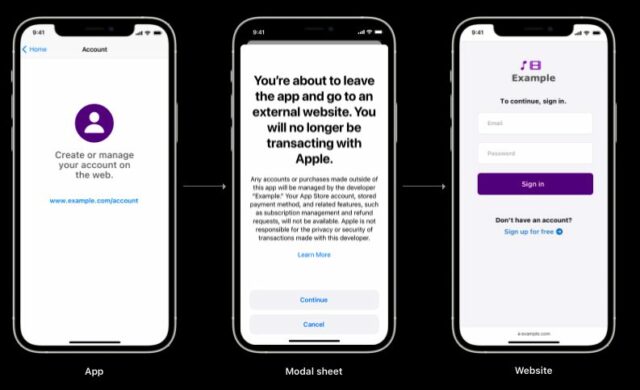 Apple also states there are requirements that developers must take into account when registering for entitlement. These include linking to a website they own or have responsibility for. The link must open a new window in the default broswer. The link must also go directly to the website without any redirects.

As Apple and its third-party partners move into this new phase of the App Store, it’s likely there will be hiccups along the way. However, this is a good step towards improving the user experience and streamlining the process of installing an app and creating a brand new account. This will simplify and encourage app discovery in the future.