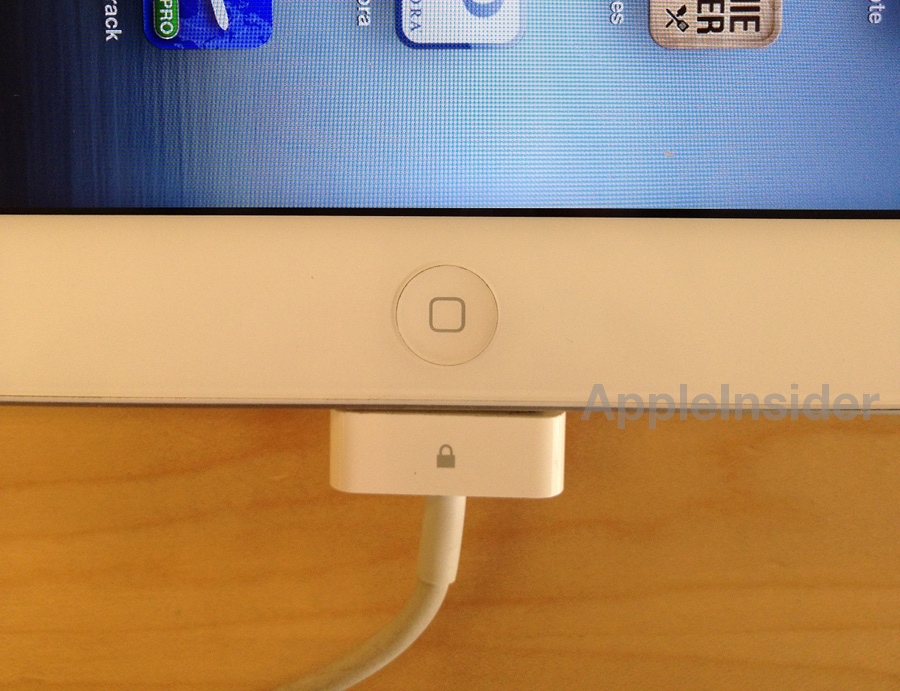 With rates of crime hopping through the roof these days, it can be hard to trust the thousands of people walking through the Apple store daily. Anyone in the store could easily yank an iPad (or iPhone) and run out the door. That wouldn’t be good, and Apple doesn’t really want to take that chance.

In various stores throughout the world a new anti-theft dock connector has appeared attached to Apple store devices. This is your common sync/charge cord, except the 30-pin connector will not budge when you attempt to remove it.

Perhaps the only way to tell the mechanism apart from its less-secure counterpart is the “lock” logo emblazoned on its front, which takes the place of Apple’s usual “line within a box” representation of a male/female connector. When attached to an iDevice, the cable physically locks in to the product’s metal chassis just as a normal dock connector, but the internals have been tweaked to prevent the unit from disengaging, essentially tethering the product to the display table.

At first I thought, wouldn’t people be capable of removing the USB cable and taking off with the device and cable? But noted by our source, the cable is attached to a display unit via an adhesive patch.

An AppleInsider source also explained the new cable’s capability of being equipped with an alarm. It is unknown if Apple plans to use the alarm system, but if they do, then employees will be alerted if a product happened to be tampered with.

This cable will not hit the mark from what we’ve heard. We aren’t even sure whether Apple or a third party developer is producing the product.

Update: A friend of ours has mentioned these anti-theft dock connectors were implanted in March, but were discontinued shortly after due to ineffectiveness.