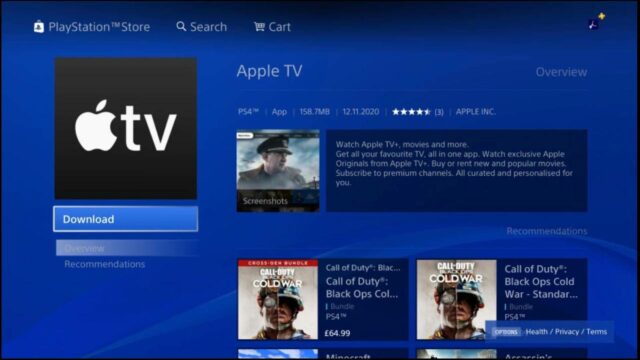 Players can navigate through the PlayStation Network store to begin installing the Apple TV app on their PlayStation 4 or newly unboxed PlayStation 5. Upon downloading the app, users can then sign in with their Apple ID. They will then be able to access their iTunes library as well as gain access to Apple TV+ with their subscription or sign up for $5.99/month CAD.

Apple TV+ is home to many of Apple’s original movies and shows such as the video game-centric ‘Mythic Quest: Raven’s Banquet’. Additionally, acclaimed shows such as ‘The Morning Show’ and ‘Ted Lasso’ can also be found.

This is a major expansion for Apple and Apple TV as Sony reported that it sold 112 million PlayStation 4 units since launch. Launching the Apple TV app on PlayStation Network opens up a very large potential user base. Apple can now provide its streaming service to additional users purchasing the PlayStation 5 today in Canada, the US, Mexico, Australia, New Zealand, Japan, and South Korea. On November 19th, the PlayStation 5 will launch globally where the number of potential users will continue to grow.