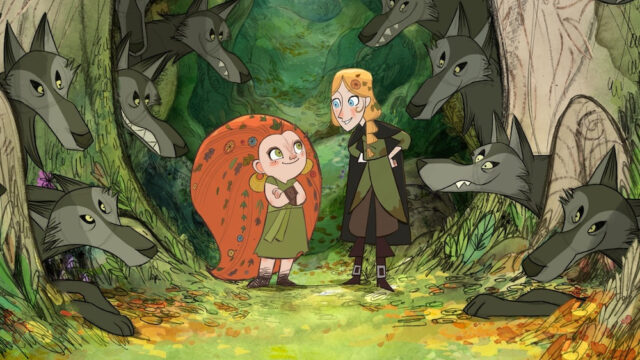 ‘Wolfwalkers’ first premiered on Apple TV+ on December 11th, 2020. The animated film is heavily inspired by Irish Folklore and concludes director Tomm Moore’s “Irish Folklore Trilogy” which contains 2009’s ‘The Secret of Kells’ and 2014’s ‘Song of the Sea’. Wolfwalkers tells the tale of an apprentice hunter known as Robyn Goodfellowe and her father, who arrive in Ireland to hunt a pack of wolves. Robyn meets a young girl from a mysterious tribe who is long rumoured to have the ability to shapeshift into wolves at night. This catapults Robyn’s adventure in a way she never imagined.

The film is accompanied by voice talent from such stars as Honor Kneafsey, Eva Whittaker, Sean Bean, Simon McBurney, Maria Doyle Kennedy, Tommy Tiernan, Jon Kenny and John Morton. It was directed by Tomm Moore alongside Ross Stewart and written by Will Collins.

Pertaining to the Annie Awards, ‘Wolfwalkers’ has been nominated for a total of 10 awards, including:

Additionally, Apple TV+ picked up an 11th award thanks to the animated series ‘Stillwater’, which is nominated for ‘Best TV/Media – Preschool’ for its episode titled The Impossible Dream / Stuck in the Rain.

‘Wolfwalkers’ has already been praised and acknowledged by many other critics. In the past year, the film has received various accolades including the award for ‘Best Animated Film’ at the Toronto Film Critics Association Awards and San Diego Film Critics Society Awards. Recently, it was nominated for ‘Best Animated Feature’ at the Golden Globes but the committee ultimately gave the award to Disney’s Soul’.

The 48th Annie Awards will be held virtually on April 16th. It will be livestreamed with the award show beginning at 10 PM EST.