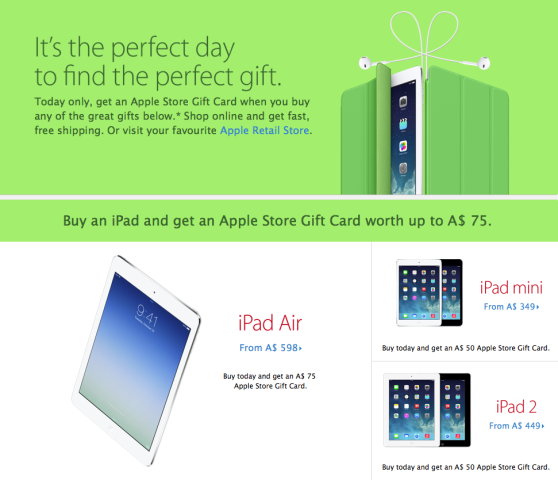 The anticipated one-day Apple shopping event is live now in Australia, and as Mark Gurman hinted yesterday it doesn’t include discounts, but instead gift cards. As each year, we can expect the same Black Friday promotion in Canada as well.

The biggest gift card is offered for Mac purchases, and here is what Apple is offering to customers who step into a brick-and-mortar or online Apple Store: If you buy a Mac computer during the shopping event, you’ll get a gift card worth AUS$150 (CAD$144) and it doesn’t seem to matter which model you choose: a MacBook Air, an iMac, or a MacBook Pro.

Customers will also get an Apple Store Gift Card if they opt for an Apple TV (AUS$25, CAD$24) or an AirPort Time Capsule – 2 TB (AUS$50, CAD$48). Third-party accessories such as the Parrot AR, Drone 2.0 or olloclip Telephoto and circular polarizing lens for iPhone 5 will get customers a gift card worth AUS$50 (CAD$48).

These amounts will likely be rounded when the Black Friday promotion goes live in Canada.

December 1st marks World AIDS Day and Apple is continuing to support Global Fund in its worldwide fight to stop AIDS. In doing so, Apple Stores around the world are promoting (PRODUCT)RED displays and products. Additionally, Apple is promoting apps, videos, and other materials on its products to help increase visibility. Since 2006, Apple has...
Steve Vegvari
15 hours ago