Behind the Scenes of the Upcoming ‘iSteve’ Biopic Revealed

What’s the speed record in creating a biopic from idea to 80 minute final cut? Well, 8 weeks – according to what Ryan Perez, the writer and director of iSteve, told Fast Company. This obviously leads to inaccuracies, but Perez encourages the audience to catch and note them. 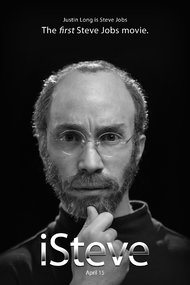 With the premiere of Funny or Die’s first feature-length movie scheduled for April 15, the audience might want to know that what they will see is by far the least coherent (and most intentionally funny) Steve Jobs biopic, written in only five days using Jobs’ Wikipedia pages and interviews as source material. It was then filmed in another five.

Why the rush? To create a funny “version that’s even more rushed than those [serious] versions, by creating the epitome of a rushed and inaccurate biopic,” Perez said.

“Almost nothing that you see that’s based on a true story feels like a true story,” Perez tells Co.Create. “This movie takes a lot of dramatic license, but does it take as much dramatic license as Liz and Dick on Lifetime with Lindsay Lohan? I honestly don’t know.”

However, to achieve that you need a couple key elements, and Perez has been fortunate to have a good casting: Justin Long as Steve Jobs (the guy who was the face of Mac in the famous “Mac and PC” series of ads), Jorge Garcia as Steve Wozniak, as well as James Urbaniak and Michaela Watkins as Bill and Melinda Gates.