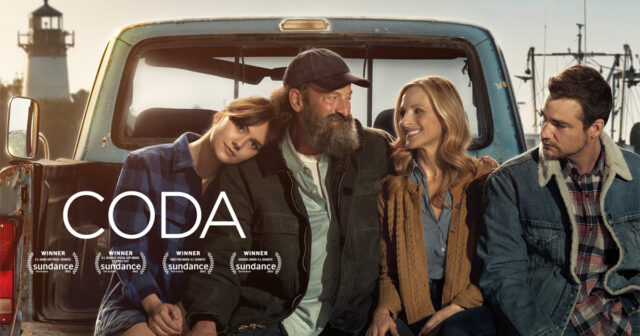 ‘CODA,’ a film that received many Sundance accolades, is now available to stream on Apple TV+ in Canada.

This film has been described as a feel-good movie with heart. Apple won the streaming rights for CODA following a bidding war against the likes of Netflix and Amazon, spending a record-breaking $25 million for the rights of the film. It became the largest deal recorded at Sundance. CODA is a remake of the 2014 French drama movie ‘La Famille Beilier.’ CODA is an acronym for “Children of Deaf Adults”.

CODA tells the story of 17-year-old Ruby (Emilia Jones), who is the only member of her family who can hear. Her day-to-day life consists of helping her parents and brother run a family-owned fishing business. However, Ruby dreams of pursuing a future in singing and wishes to attend music school.

Alongside Jones, CODA stars deaf actors Marlee Matlin, Troy Kotsur and Daniel Durant in key roles in its inclusive cast. The film was written and directed by Sian Heder, whose filmography includes directorial work on episodes of ‘Orange Is the New Black,’ ‘GLOW,’ and Apple TV+’s ‘Little America.’