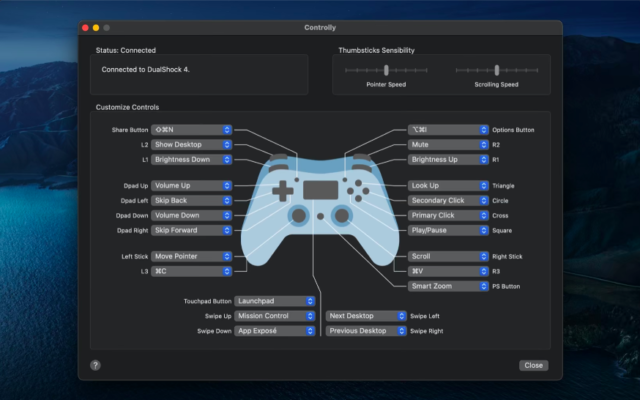 With the Controlly app installed, any Bluetooth enabled gamepad will likely be compatible with the app. Controlly allows the user to fully map the functions of the Mac to different buttons and trigger inputs.

The standard control layout has the controller’s left stick act as the mouse. On the DualShock 4, the Cross button acts as the primary click input while the Circle button acts as the secondary. Media playback is also accessible with play and pause functions. The D-Pad can control volume and fast forward/rewind. The shoulder buttons adjust the brightness while the R2/right trigger will mute the volume. Of course, all inputs are fully mappable so each user can customize the control layout to their preferences.

The use of the Controlly app is made by enabling the Accessibility feature within the Mac. Afterwhich, users must grant the app access to control the device. Without it, Controlly will not function as intended. Although the use of a controller on a Mac may not be for everyone, it’s an excellent accessibility option for those who may struggle to use the Apple Magic Mouse for long periods of time.

Controlly app developer Hugo Lispector posted a tweet announcing the app’s launch, stating he wanted to use a “controller as remote for Mac”. Lispector took matters into his own hands and created an app himself.

I wanted to use a game controller as a remote for Mac, but I couldn’t find an app for that. So I’ve built one myself and it’s now available on the App Store 🎮🥳: https://t.co/HEkFXUtMeL

Special thanks to @siracusa for finding an interesting bug just before launch! pic.twitter.com/2QVwvZjjvI

The Controlly app is available to fully test on a seven day trial period. At the end of the trial, users can purchase the app for $5.49 CAD which will unlock the app’s functionality in perpetuity.