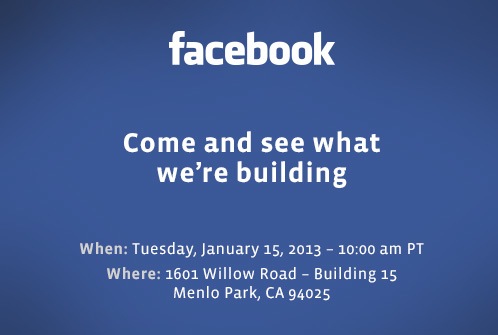 According to a report by MG Siegler over at TechCrunch, his sources note Facebook could introduce a phone next week at the company’s mystery media event:

And so, with that in mind, multiple sources have told us that they expect some sort of Facebook Phone to be on display on Tuesday.

Now for the caveats (and they’re important). It’s not entirely clear if this will be an actual piece of Facebook branded hardware or if they will simply use hardware from a phone maker to show off some sort of new Facebook OS for mobile. That is to say, it could very well be that the “Facebook Phone” is more about a Facebook OS running on a phone (or a few phones).

Siegler also notes other people apparently in the know have mentioned the event will be a “big deal” and related to “mobile”. There’s no solid intel whether Facebook will announce an actual device or some sort of mobile operating system. Facebook will be holding a simultaneous event in London as well and has called on press from around the world for their event next Tuesday. Whatever it is, Facebook is making it seem pretty significant.

Just last week we speculated Facebook could announce some sort of phone-related news, based on previous reports by the WSJ that the company was working with handset manufacturers. We’ll find out soon enough.