Taiwan based Hon Hai Precision a.k.a Foxconn Technology Group, the world’s largest contract manufacturer of electronics, has posted record quarterly profit with net income climbing 5.6% to NT $37 billion ($1.2 billion), according to data compiled by Bloomberg. It is believed that company’s record profits are the result of its boosted production efficiency and output of iPhone 5 and iPad mini devices. 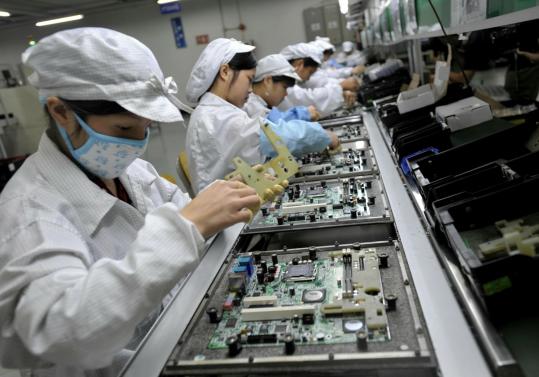 Apple, which contracts Foxconn to make its iPhones and iPads, reported the lowest gross margin in two years, indicating that it’s paying more for components and assembly. As a result, Hon Hai’s own gross margin climbed to a three-year high of 9.58% in the fourth quarter. The source points out that Foxconn raised its revenue and margins by solving production problems that had crimped output of the iPhone 5 in the prior quarter.

“As they scaled up production of the iPhone and solved production bottlenecks, Hon Hai’s profit margins improved and they may have had some room to push Apple for better pricing,” said Vincent Chen, who rates the stock buy at Yuanta Financial Holding Co. in Taipei. “Shipments of iPhone started to drop significantly in the first quarter and there may be no new product to boost sales a lot in the second quarter either.”

Foxconn is now looking to buy a 9.9% stake in Sharp Corp. Japan, though issues such as price, management control and company strategy are reportedly keeping the deal from completion.