A new study carried out by CrowdFlower, Apple Maps are much more likely to send you in the wrong direction as compared to Google Maps, with approximately 3.4% major error rate in the US, compared to 1.1% for Google Maps and 1.3% for Bing. 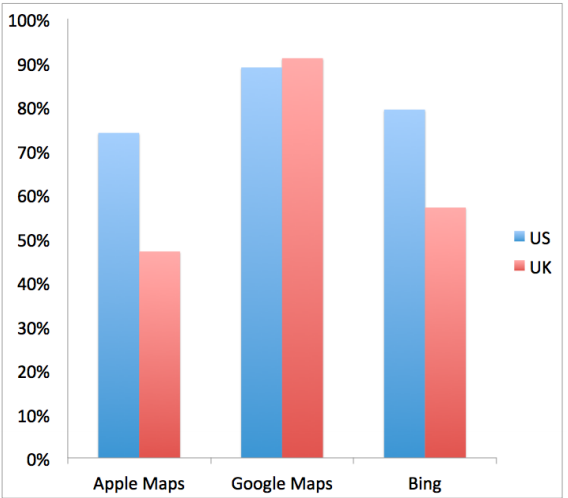 To find out how Apple Maps stack up against Google’s and Bing’s maps, CrowdFlower picked a random 1,000 business listings in the U.S. and another 100 in the U.K. For each listing, they noted whether you could find it on each of the mapping services, and if so, how accurate the results were. The chart above shows results for the first part, while the one below reflects  the percentage of listings with major errors.

Apple’s performance was the worst of the three mapping services, with only 75% of listings found in the U.S. experiment, and a surprising 50% missing in the U.K. But things get worse for the Cupertino company when you look at just listings found. What percentage were shown in the wrong place?

Fully one third of U.K. listings are inaccurately placed, making Apple Maps pretty much unusable in that country. But even in the U.S., where the error rates are much lower, Apple Maps gets the location wrong 3.4% of the time — three times Google’s error rate of 1.1% and Bing’s error rate of 1.3%. 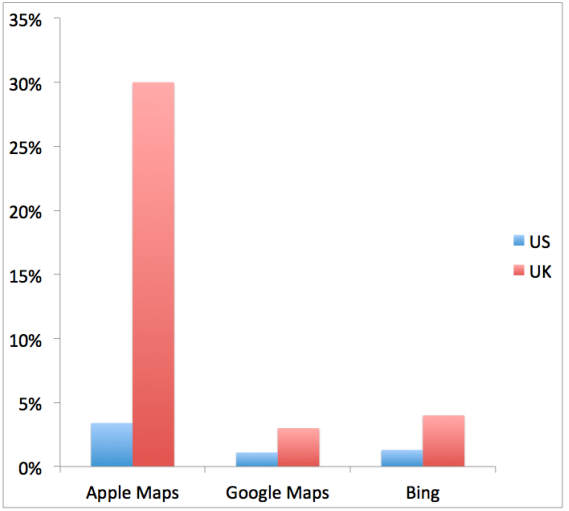 Nonetheless, Lukas Bergstrom, the lead product manager of CrowdFlower, gave Apple Maps a pass for now saying, “small businesses are closing and starting up all the time, and Apple is just getting into this game”.

An Alaskan snowmobiler who found himself in need of assistance is the first reported person to utilize Apple's Emergency SOS via Satellite service. According to Alaska State Troopers (via 9to5Mac), an adult male travelling from Noorvik to Kotzebue on a snowmobile activated the Emergency SOS via Satellite service on his iPhone. On December 1st, at...
Steve Vegvari
23 hours ago

The operating system (OS) for Apple's long-rumoured mixed reality headset is now reported to be dubbed "xrOS." This naming convention comes following reports that Apple was naming its AR/VR headset OS "RealityOS." In a report from Bloomberg, Apple's new naming convention appears to have come out of nowhere. However, the report goes on to state...
Steve Vegvari
24 hours ago