Apple’s iPhone 12 and iPhone 12 Pro have both appeared on the AnTuTU benchmarking platform. While Apple had only just revealed its new smartphone lineup this week, two of the four devices have already been given AnTuTU scores based on metrics such as CPU and GPU. 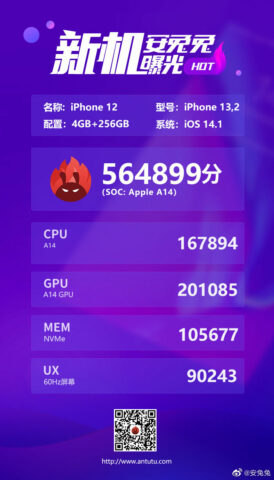 As MySmartPrice points out, the benchmark scores of the iPhone 12 and iPhone 12 Pro have not exceeded the benchmark laid by the Qualcomm Snapdragon 865 processor. However, the AnTuTU tests do not replicate the day-to-day usage most users will find with their device. With that said, a consumer may experience better performance from the iPhone 12’s A14 processor over the Qualcomm Snapdragon 865 processor.

Fresh off the heels of the launch of Apple's HomePod (2nd-Gen), TF International Securities' Apple analyst Ming-Chi Kuo believes a successor to the HomePod mini 2 could be on its way. In a tweet thread surrounding Apple supplier Goertek, Kuo discussed that the Weifang-based components company has "secured NPI and assembly orders" for the ‌HomePod mini‌...
Steve Vegvari
19 hours ago