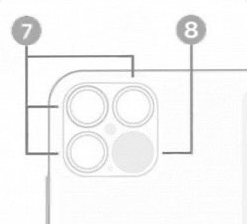 Apparent images of the iPhone 12 Pro have surfaced online. The picture of what looks to be a render from a user guide shows the camera array of Apple’s upcoming new flagship device.

The image in question appears to have been leaked by Concepts iPhone on Instagram. In the past, the account has published photos of concept images and other visual leaks of Apple products. The latest sees the rear side of what is apparently the iPhone 12 Pro and its camera setup.

Based on the photo, the iPhone 12 Pro may have a triple-lens camera array. A logical assumption is that the iPhone 12 Pro will incorporate a Wide-angle, Ultra-Wide Angle, and Telephoto lens. The big discovery here is the addition of a LiDAR Scanner, the first for an iPhone. The addition of a LiDAR Scanner, the same which was included with 2020’s iPad Pro, could improve AR capabilities as well as the iPhone’s Portrait Mode.

The image took off online. It was eventually posted on Twitter by user @Choco_bit, who claims to have ties with Apple Authorized Service Providers. Following that, established Apple leaker @EverythingApple followed this new up with a claim that two of his sources have confirmed the LiDAR Scanner news. After seeing @Choco_bit’s post of the image, @EverythingApple wrote: “2 sources confirmed @choco_bit is a legit source. This is it boys. Bigger LiDAR sensor, but this is it.”

2 sources confirmed @choco_bit is a legit source. This is it boys. Bigger LiDAR sensor, but this is it. pic.twitter.com/yxCRn19FXi

It is widely assumed that Apple will indeed debut a new line of iPhone devices this fall. Despite the COVID-19 outbreak, reports have indicated that Apple is still on track to launch the iPhone 12 this year.