iTV with iRing to Launch this Year, Analyst says

Based on fresh information received by Brian White of Topeka Capital Markets during an Apple suppliers tour of China and Taiwan, he believes Apple will release three new products: iTV, iRing, and iWatch. 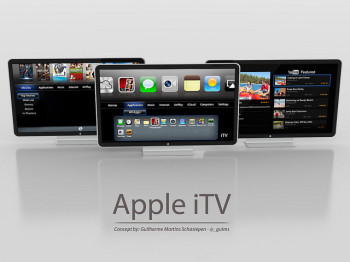 In a research note shared with Apple Insider on Wednesday morning, the analyst expressed his belief that Apple will launch a full-blown television set later this year, something that will “revolutionize the TV experience forever.”

An interesting addition to the already persistent iTV rumours is the iRing accessory, a new concept that aims to act as a navigation pointer for the television, replacing some of the functionalities of a remote.

But there is more: According to White, the iTV will come with a secondary “mini TV” screen of approximately 9.7 inches (I think this size may sound familiar to many of us), which he believes will have multiple functions. It will allow users to view content, but it could be used for home monitoring, video conferencing, phone calls, etc., but it won’t be an iPad replacement.

“Essentially, we believe the ‘mini iTV’ screens will be able to capture content from the 60-inch ‘iTV’ across a distance of up to 200 meters, allowing a user to view ‘iTV’ content in the kitchen, washroom, garage, bedroom, backyard, etc.,” White wrote. “We believe Apple will offer one ‘mini iTV’ per ‘iTV,’ but package options will include up to four screens (i.e., one screen is part of the standard package and pay extra for each additional.”

To complete the arsenal of wearable computing, Brian White says the iRing is coming, alongside the iWatch. By wearing both, users can forget about carrying a smartphone with them, at least around the house.

Brian White expects the iTV to be priced between $1,500 and $2,500 (a bit more than Americans are willing to spend on an Apple television set [see this survey]), with the number of “mini iTVs” defining the final amount. The iTV, however, is expected to measure 60 inches, but it will also be available in the 50- to 55-inch range.

About the iPhone 5S: He believes a secure fingerprint reader will be the main selling point of the handset, which he expects will launch in July. “Beyond the next iPhone, White believes Apple’s fingerprint scanning technology will come to other devices from the company, namely an “iWatch” wrist accessory that he expects will launch this year. In his tour, he found “early signs of movement in the supply chain,” signaling Apple could be ramping up to produce such a device,” Apple Insider informs.