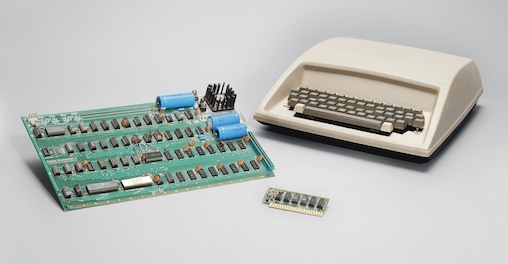 The computer that started it all for Apple, the “Apple-1” will soon be auctioned off at Christies in October for an estimated $126,000! The history of the device goes way back to 1976 when Apple co-founder Steve Wozniak built the circuit board by hand. But there is one catch to this auction, the Apple-1 is no longer operable.

ComputerWorld has more on the importance of the Apple-1:

“This is the computer that started Apple, now recognized as the most valuable company in the world,” said James Hyslop, a Christie’s scientific specialist, in a statement Tuesday. “Its significance in making computer technology accessible for all cannot be undervalued.”

When the computer went on sale during July of 1976, the sale price was a whopping $666! That is a considerable amount of cash during that time if you calculate inflation costs. According to an inflation calculator that is $2,668 in today’s age.

Even at the overly expensive price, the Apple-1 wasn’t sold as a full computer. Consumers were given a full-assembled circuit board and had to purchase the casing, power supply, keyboard, and monitor themselves.

The last time an Apple-1 was sold happened to be during the summer. A New York City auction featured one-of-six working Apple-1 computers. The final sale price ended at 376,000!

In October, Christies will auction the Apple-1 with a starting bid of $79,000. They are confident though that the non-operable computer will sell for near $126,000.