Samsung Desperate To Catch Up With Apple In Enterprise

While Apple has already moved to the top of enterprise market, thanks to the popularity of the iPhone and iPad with professionals, Samsung is still playing catch up. In a recent article, Bloomberg Businessweek points out how the Korean tech giant captured an enterprise order by creating a custom version of its popular Galaxy S II smartphone. 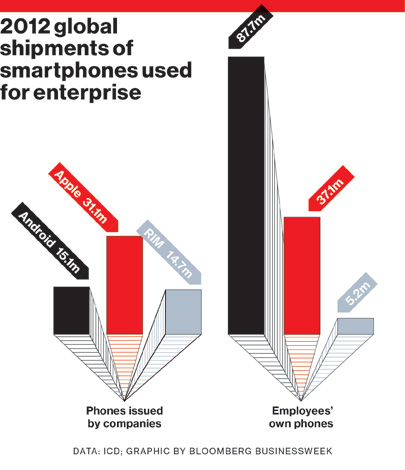 The enterprise market includes companies that distribute smartphones and tablets to employees, who use them for checking e-mail and tasks such as tracking sales, as well as companies like Preventice, health-care startup, that want to resell the devices as part of their own products. Preventice asked Samsung to create a custom version of its popular Galaxy S II that can transmit data from a patient’s heart monitor to a doctor and also disable downloads, which might interfere with a cellular connection. Samsung made the necessary changes in 6 weeks, agreeing to pick up $40,000 in engineering costs.

On the other hand, Apple has made itself safe in the eyes of chief information officers (CIOs), with at least 80% of large companies testing iPhones and iPads for employee use. However, CIOs see Android an an unsafe mobile OS, the biggest obstacle for Samsung.

Samsung needs to persuade more CIOs to give Android a chance. According to IDC, roughly half of the 125 million iPhones sold by Apple in 2012 were used to run corporate applications, compared with only about 20 percent of Android phones.

Still, Samsung does have an opportunity. While Wagner is aware how difficult it will be to get business people to ditch their iPhones, he says there’s plenty of new business to be had from companies that need something beyond Apple’s one-size-fits-all formula. Apple doesn’t customize its products for anyone, or partner with third-party software makers to target specific industries. Samsung will, Wagner says.

Will Samsung succeed in picking up the enterprise business and offer better services than Apple?

An Alaskan snowmobiler who found himself in need of assistance is the first reported person to utilize Apple's Emergency SOS via Satellite service. According to Alaska State Troopers (via 9to5Mac), an adult male travelling from Noorvik to Kotzebue on a snowmobile activated the Emergency SOS via Satellite service on his iPhone. On December 1st, at...
Steve Vegvari
12 hours ago

The operating system (OS) for Apple's long-rumoured mixed reality headset is now reported to be dubbed "xrOS." This naming convention comes following reports that Apple was naming its AR/VR headset OS "RealityOS." In a report from Bloomberg, Apple's new naming convention appears to have come out of nowhere. However, the report goes on to state...
Steve Vegvari
13 hours ago