Beating Apple wasn’t just the No 1. priority for Samsung: everything needed to be in the context of beating Apple, an internal document detailing the South Korean manufacturer’s priorities for 2012 obtained by AppleInsider show. 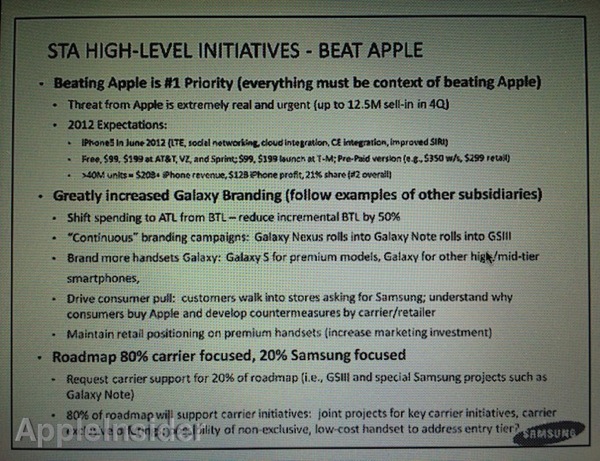 The document looks back over the previous year and the lessons Samsung has learned, and also emphasizes that the threat from Apple is “extremely real and urgent”, also projecting expectations for the iPhone maker’s sale performance.

The document noted Apple’s competitive pricing and predicted Apple would sell “>40M units = $20B+ iPhone revenue, $12B iPhone profit, 21% share (#2 overall).” Apple went on to sell 150 million phones in fiscal 2013 after it launched iPhone 5 in September (two weeks before the fiscal year began); most of those sales were iPhone 5.

The catch is that Apple sold about 150 million iPhones in fiscal 2013 after the launch of the iPhone 5, despite disappointing reports that characterized Apple as not being innovative enough.

As the internal documents reveal, during the release year of the iPhone 5, higher-end Samsung smartphone models flattened as sales grew from cheap, low-end models, so the company needed to adopt a new strategy.

What they did was to follow carrier demand, which was for 80% cheap models and the rest, 20% higher-end models, according to Samsung’s strategy document. And they had a great 2013: more than 300 million smartphones sold, but high-end models accounted for only a fraction of those sales numbers. Just consider the 51 million iPhones sold in Q4 of 2013 compared to the 9 million Galaxy S4 models.

Samsung’s strategy document reveals that they not only recognized the urgent threat from Apple, but also formulated a response for 2012 that focused on cheap, low-end phones and spending billions on brand advertising.